Dharmaram College is a major study house of Carmelites of Mary Immaculate (CMI), a Catholic religious congregation, started in Bangalore on 1 June, 1957. The name 'Dharmaram' is a combination of two Sanskrit words, dharma (virtue) and aram (garden), which together mean 'GARDEN OF VIRTUES'. Dharmaram College is dedicated to the Sacred Heart of Jesus and the motto is Ishabhakti Paramjnanam (Love of God is the Supreme Wisdom). It aims at educating people who are prepared to commit themselves to the service of the Church and the world.

Following the tradition of the CMI congregation, Dharmaram College extended and expanded its activities into the field of education. It has established the Christ Educational Society with the vision of providing quality education to all. Christ college was the brain child of the late Bishop Rt. Rev. Jonas Thaliath CMI (1919-1981), whose vision was to establish a Catholic University in Bangalore. Christ Junior College, an integral part of this academic legacy of the Christ Educational Society is recognized as a model college and has been graded A by the Department of Pre-University Education, Karnataka in the year 2010.

Christ Junior College - Residential is rooted in the noble tradition of Christ College (now, Christ deemed to be University), which was established in the year 1969 with the motto 'Excellence and Service'. The college is named after Jesus Christ, the Son of God and the 'light of the world'. It is founded on the educational vision of Blessed Kuriakose Elias Chavara, the founder of Carmelites of Mary Immaculate (CMI), a religious congregation for men. Saint Kuriakose Elias Chavara was a man of God, a great educationist and a seer of the 19th century. He believed in Jnana Marga, the way of knowledge to attain salvation and in and through his deeds was a true Karma Yogi, a man of selfless action. 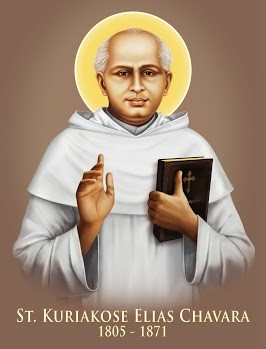 I implore Thee to illumine my eyes and mind that I may grasp well the meaning of the subject I meditate : Saint Kuriakose Elias Chavara